It is so exciting to think that next year in 2017 will mark 500 years since the Protestant Reformation!

So many people are preparing to celebrate Halloween, the occult holiday that takes place every October 31st, the same day that Martin Luther the reformer nailed the 95 theses which ignited the Protestant Reformation.

I wanted to have something fresh to think about on this Reformation week. I thought it would be a good idea to explore the topic of wives of the Reformation, meaning the women behind the Reformers! 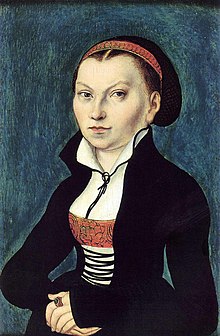 Wife t0: Martin Luther.
Proposal: She was a former nun who ran away from a convent after converting to Lutheranism. Luther helped the nuns to escape and helped find husbands for them so they would be safe. But he couldn’t find a husband for Katharina. Finally she basically proposed to Martin Luther, saying she would marry either him or another reformer Amsdorf. Luther accepted and they were married. She was 18 years younger than Luther.
Marriage: They were married for 21 years and Katharina was a smart, hardworking, stubborn and quick tongued woman who managed a whole mansion where students came to study with Martin Luther. She ran a business from home, raising cattle, tending a large garden, and running a brewery in her basement home, and she rose up at 4 a.m. everyday. She also used the mansion as a hospital.
Children: They had six children but only four lived till adulthood.
Fun Facts: She called Luther “Sir Doctor” and he called her “My Lord Katie” and “Morning Star of Wittenberg”

Wife to: Ulrich Zwingli, Reformation leader in Switzerland
Marriage: She was a widow of 3 children, struggling under poverty. Yet she was the most attentive in church whenever Zwingli preached. As a pastor, Zwingli took pity on her and her children’s condition and offered to tutor her youngest son Gerold in Greek and Latin because he noticed he was a very bright little guy. Zwingli later marries Anna in secret because during that time it was not considered proper for a priest to marry. Anna was a loving and hospitable wife. She spent time visiting the sick and poor, and opened her home to refugees of the Protestant wars. She supported her husband while he translated the Bible in the Swiss language.
Children: 7 total. 3 before marrying Zwingli, and 4 more afterward
Fun Facts: She stopped wearing jewelry after marrying Zwingli. Her husband read the proof text of the Bible translation to her as he was writing it. He dedicated the newly translated Bible to her. She worked to encourage other families to make the Bible a part of their home.

Wife to: John Knox, Scottish reformer and evangelist.
Marriage: John Knox’s first wife Marjorie Bowes died and he had 2 small children. John Knox was a good friend of Andrew Stewart who was Margaret’s father. John decided to marry Margaret even though she was 37 years younger than him. Margaret was a good secretary to John and she also took care of him when he became sick and weakened.
Children: 3 children with John Knox, several more later when she re-married after his death
Fun Facts: Margaret was a noblewoman and a relation of Mary Queen of Scots. Margaret married John Knox secretly which angered the queen because they did not receive her consent.

Wife to: John Calvin
Marriage: John Calvin asked several people to find him a wife , but since he was a difficult personality he didn’t like any of them. Finally widow Idelette caught his eye. John Calvin had helped her husband convert to Calvinism from being an Anabaptist. Calvin married Idelette and loved her deeply. She was a good caretaker because Calvin was often sick. They had a few children but all of them died as infants. Calvin wrote about his appreciation and love of Idelette in his letters to others.
Children: 3 before Calvin, a few more afterward
Fun Facts: After Idelette died, Calvin lived 15 more years but he never re-married.

Other reformers like Jan Hus, John Wycliff, William Farel, were not married.

Which of the Wives of the Reformation Impressed You Most?

One thought on “Wives of the Reformation”